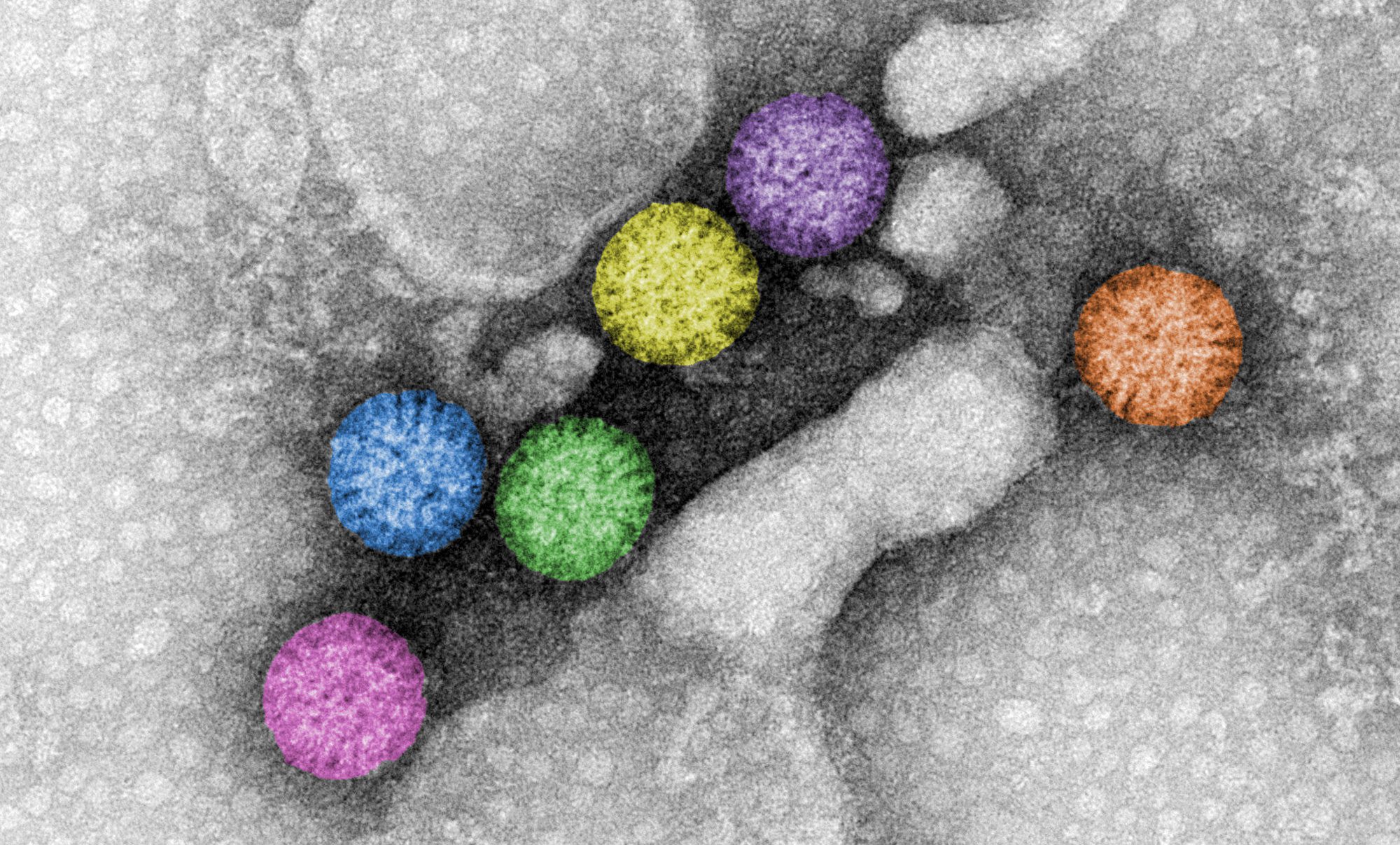 Courtesy of Catherine Eichwald, Institute of Virology, University of Zürich. 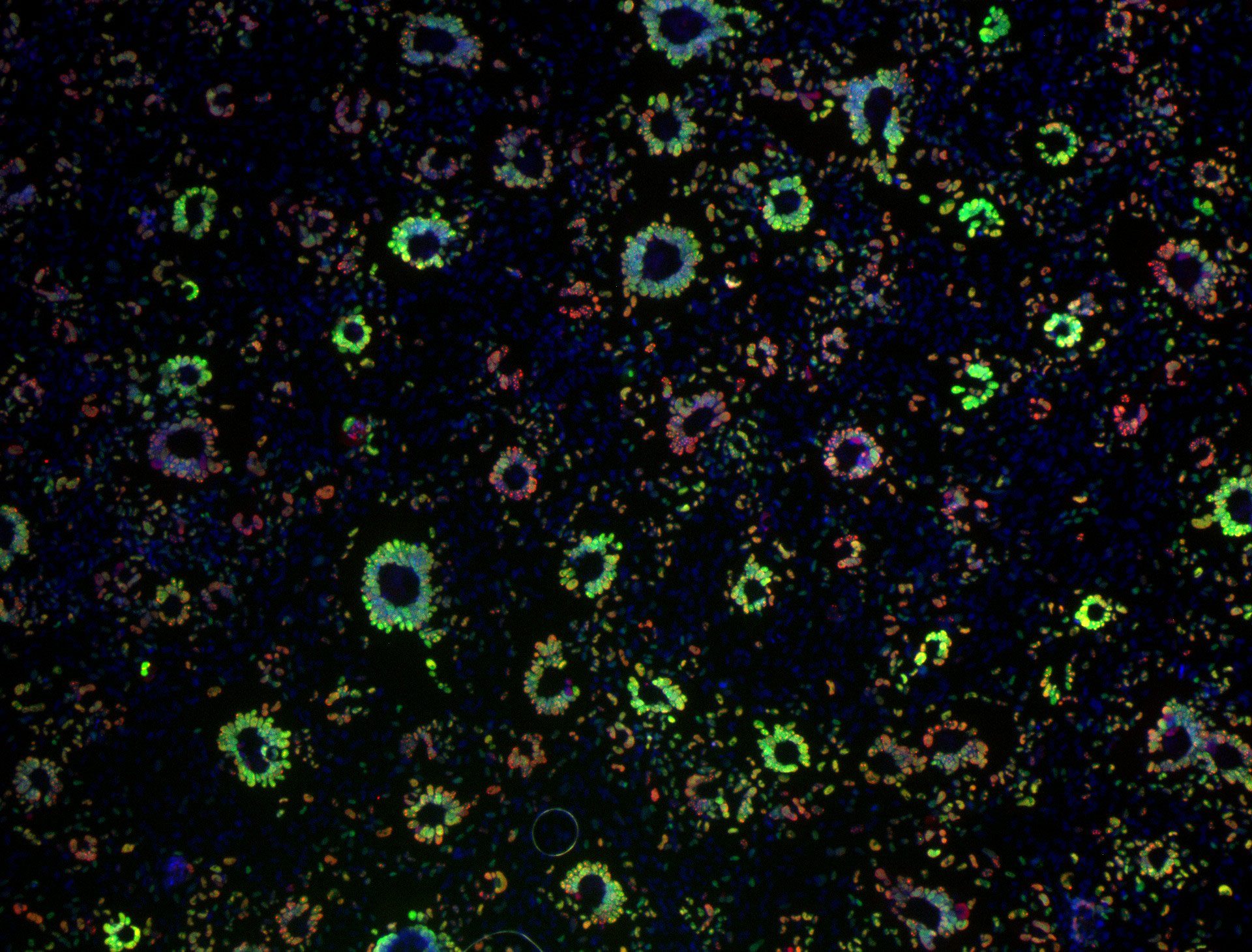 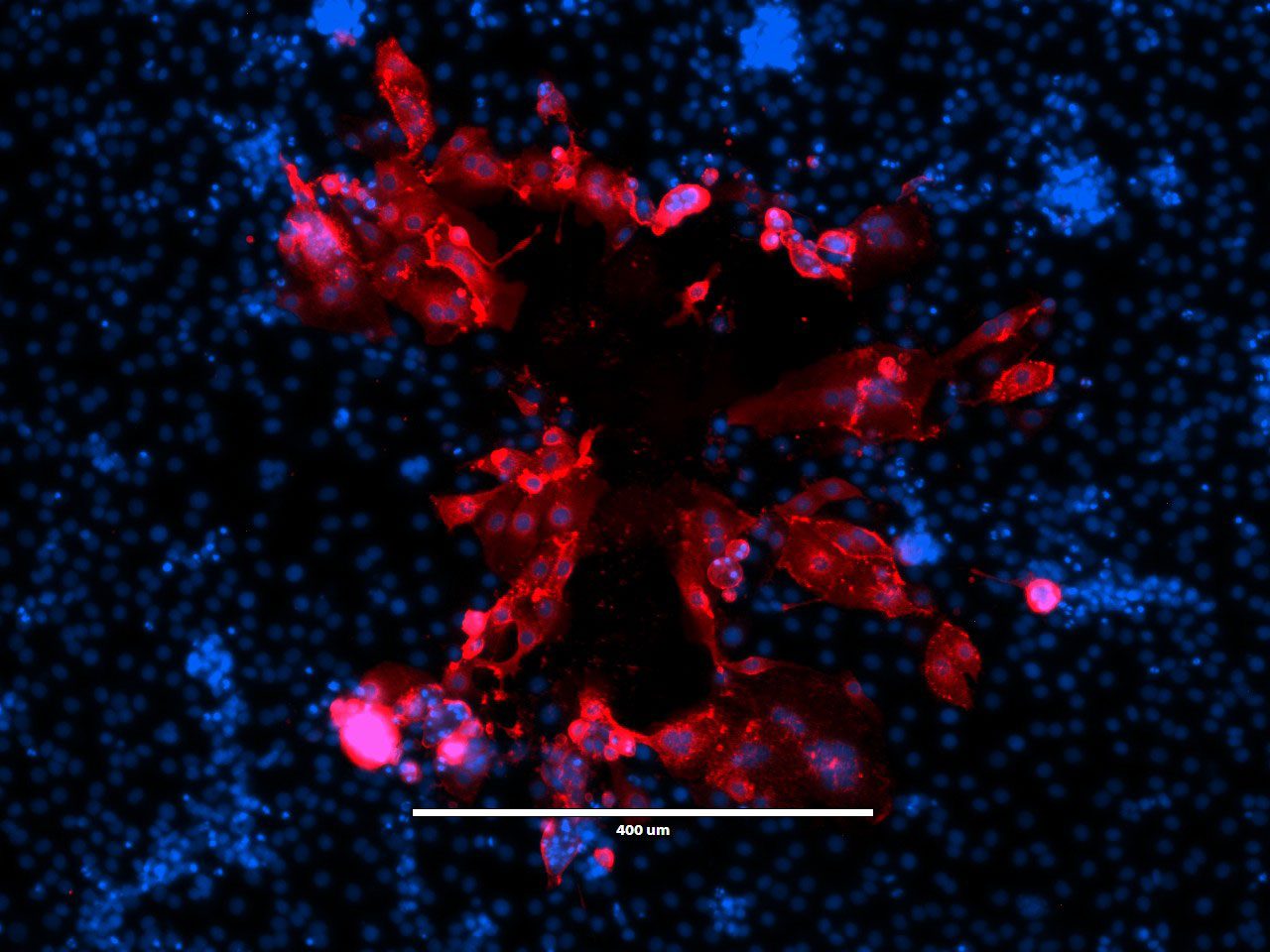 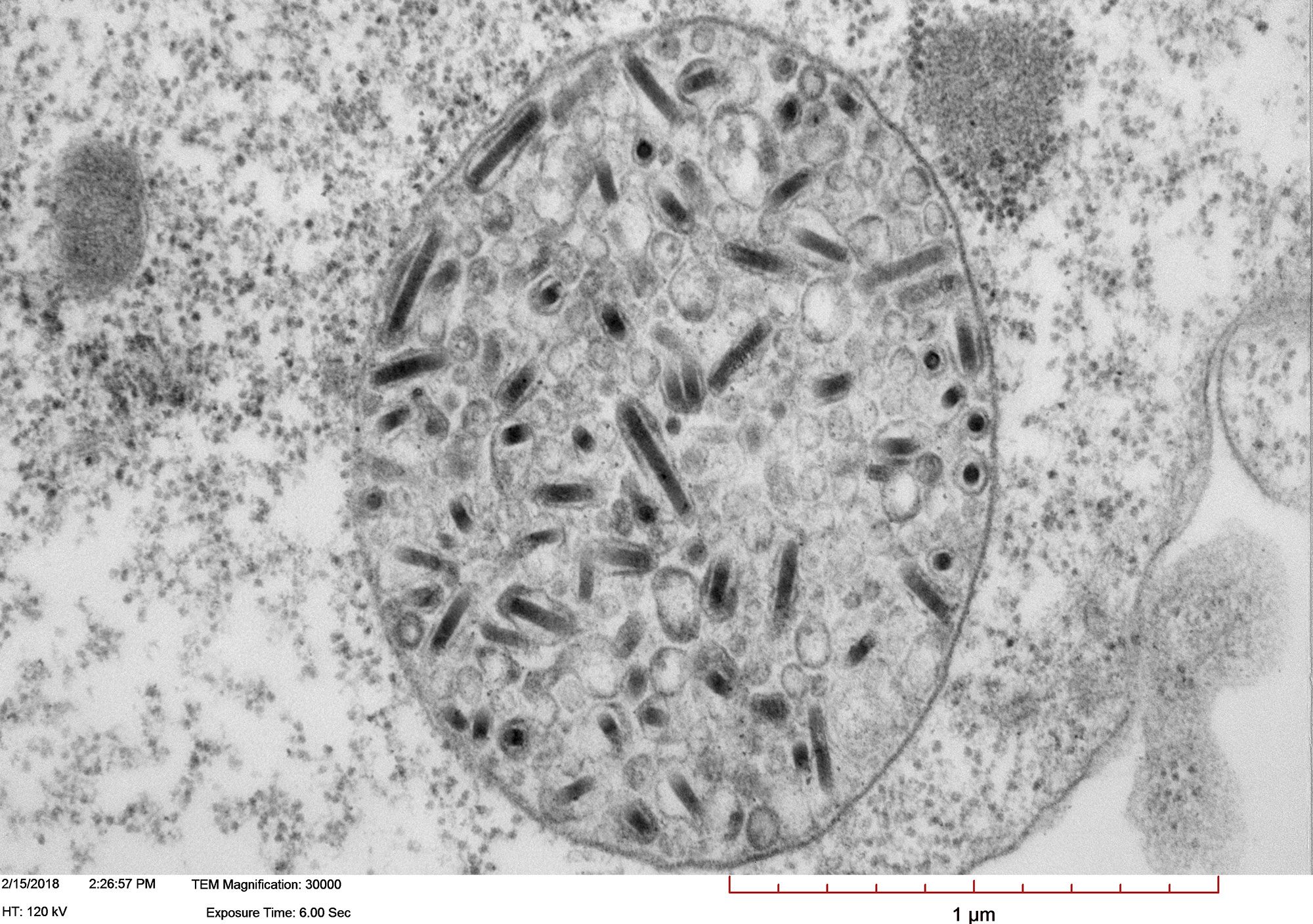 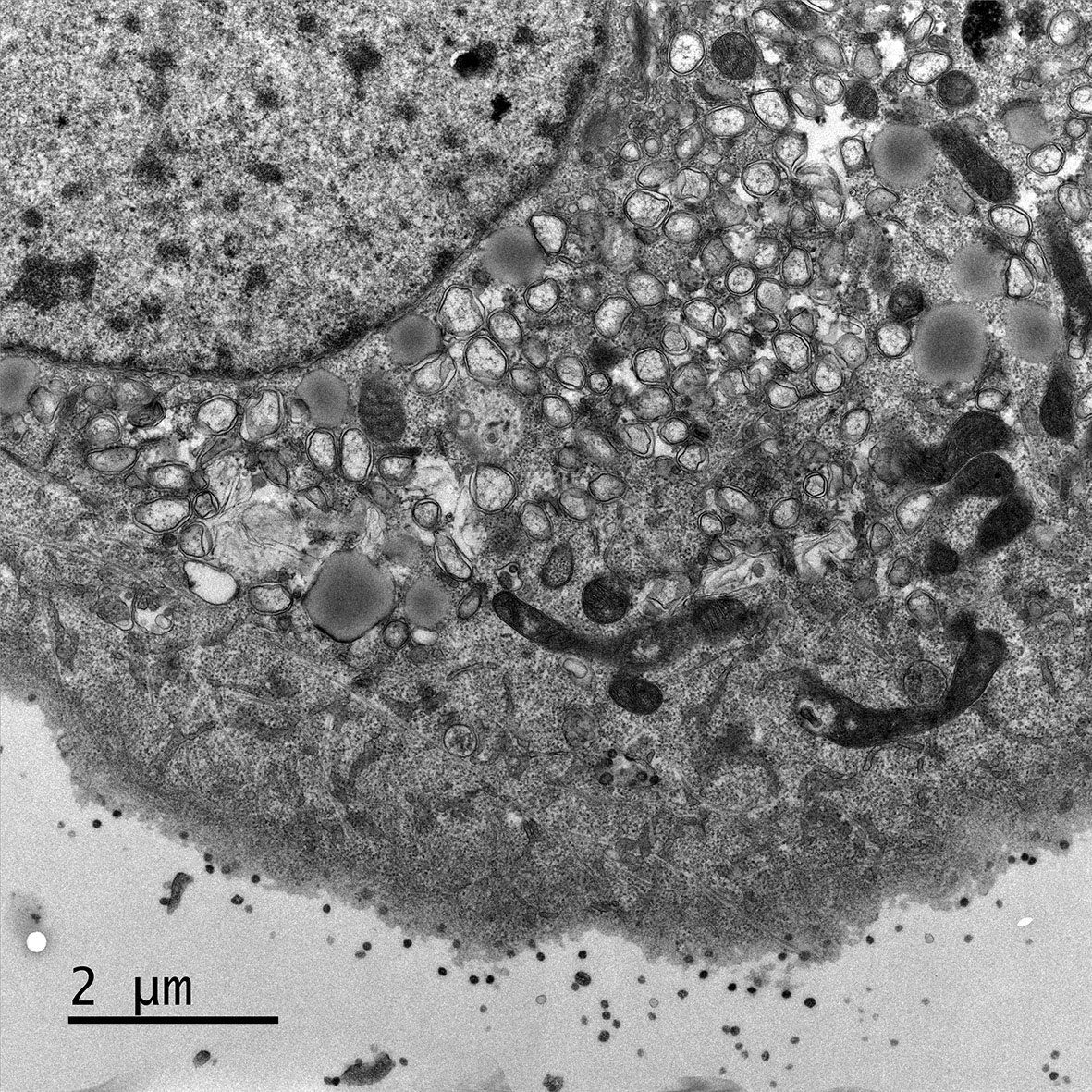 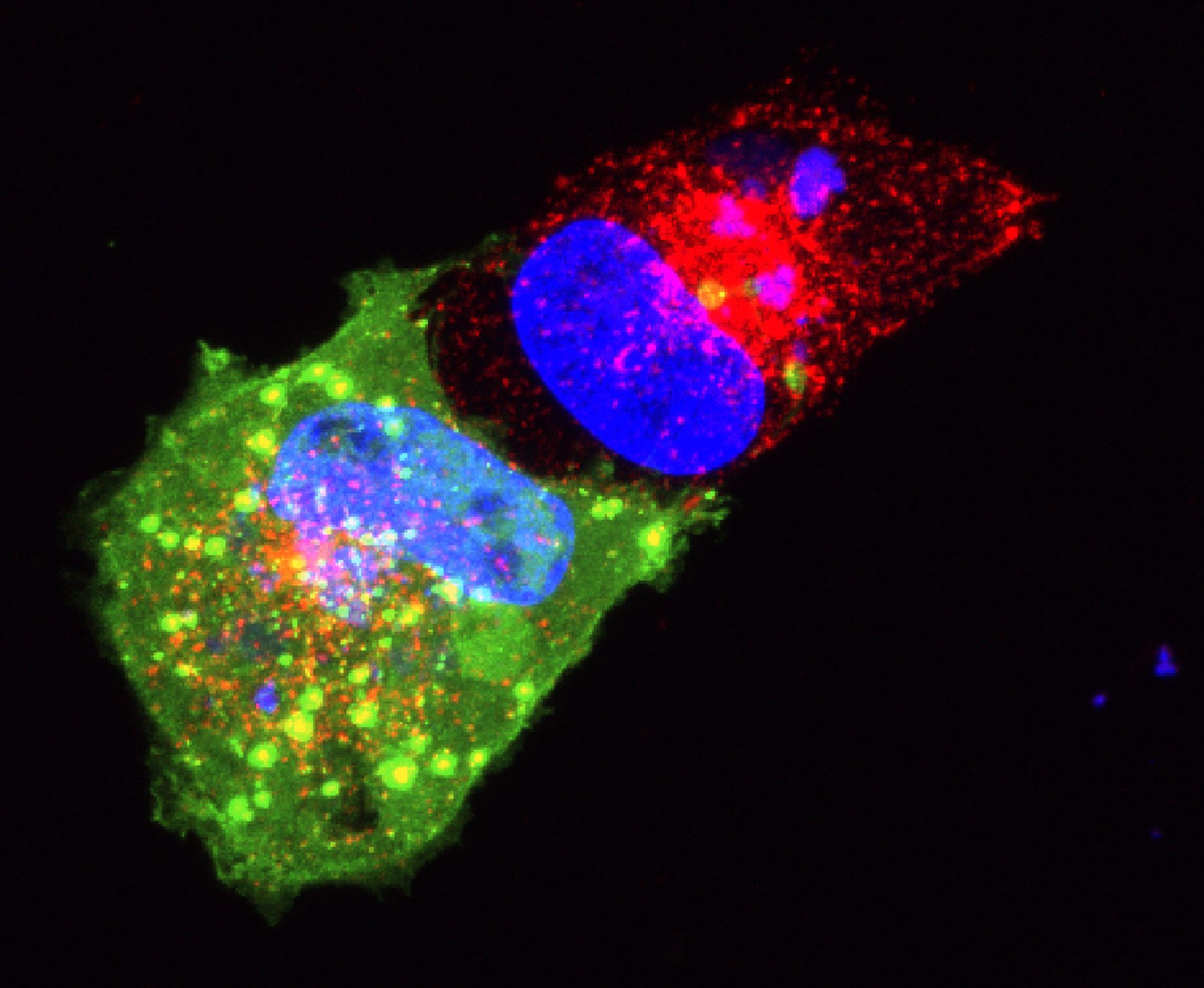 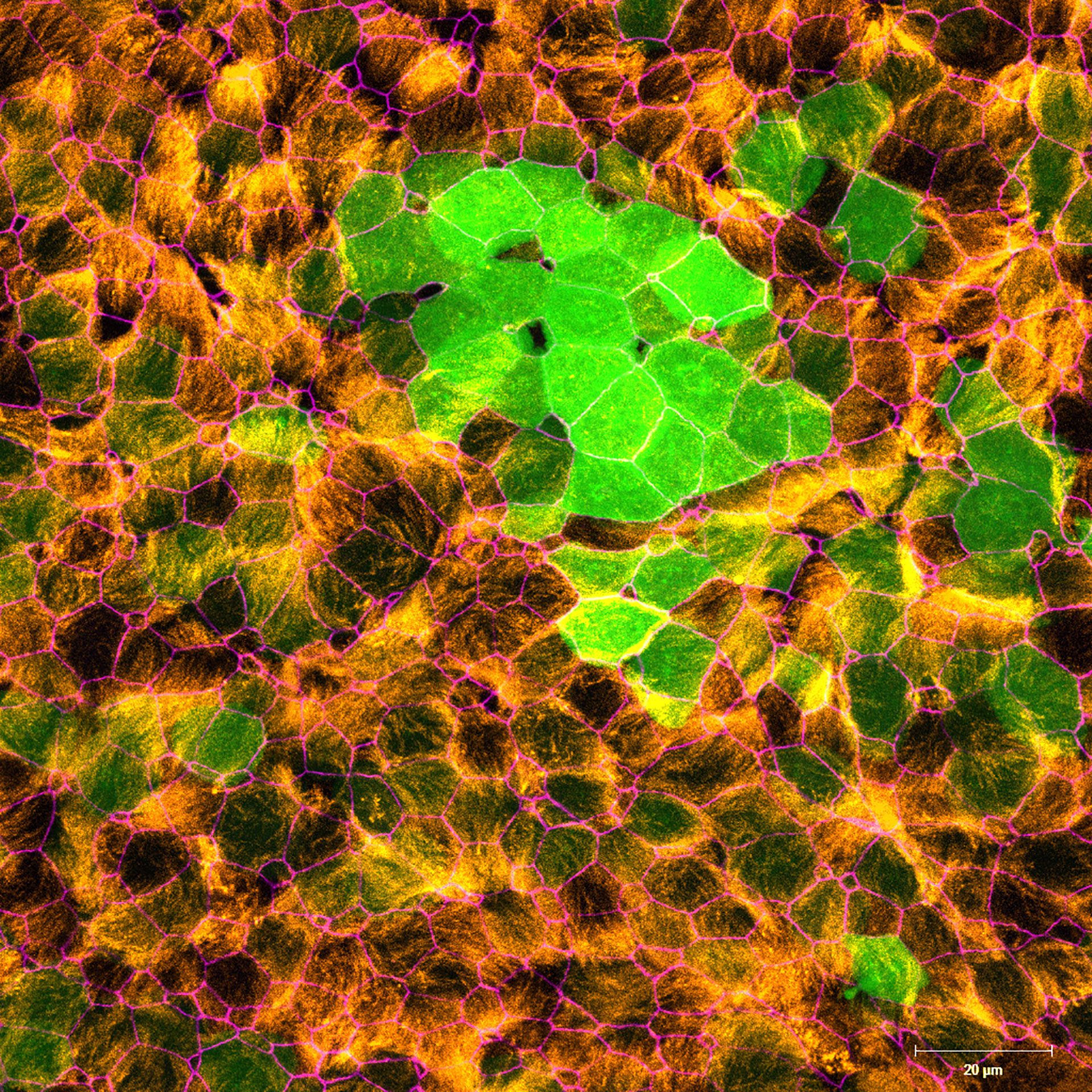 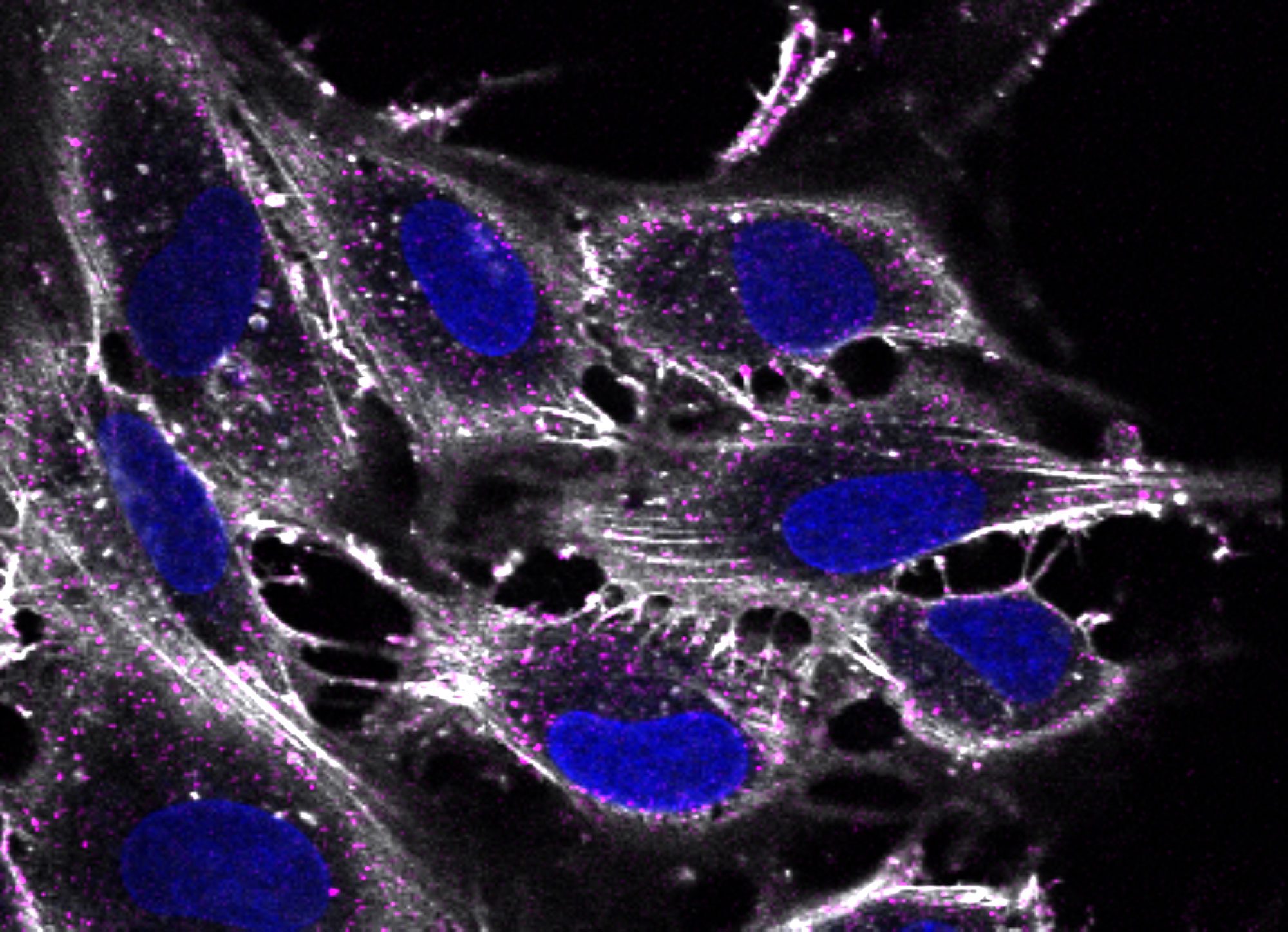 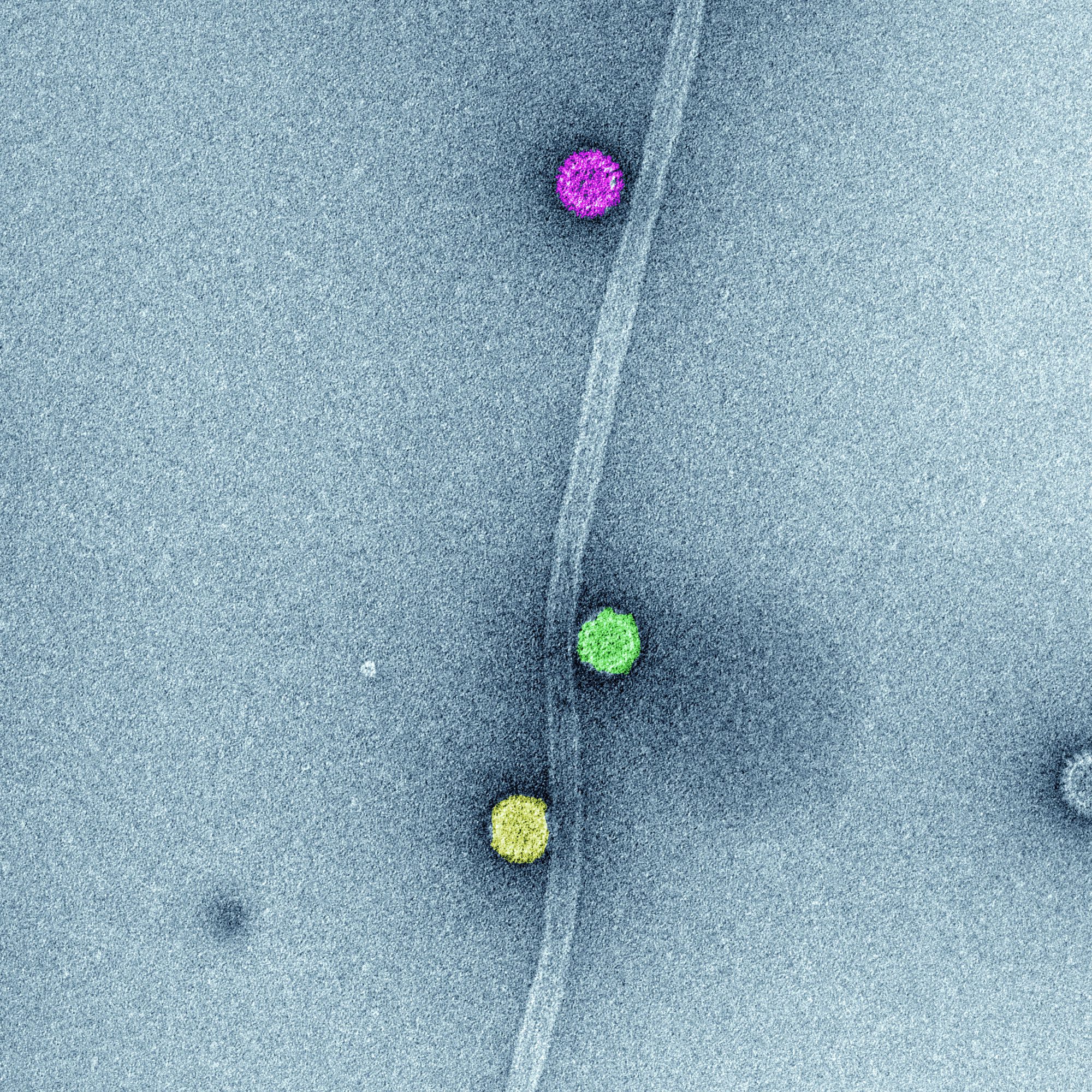 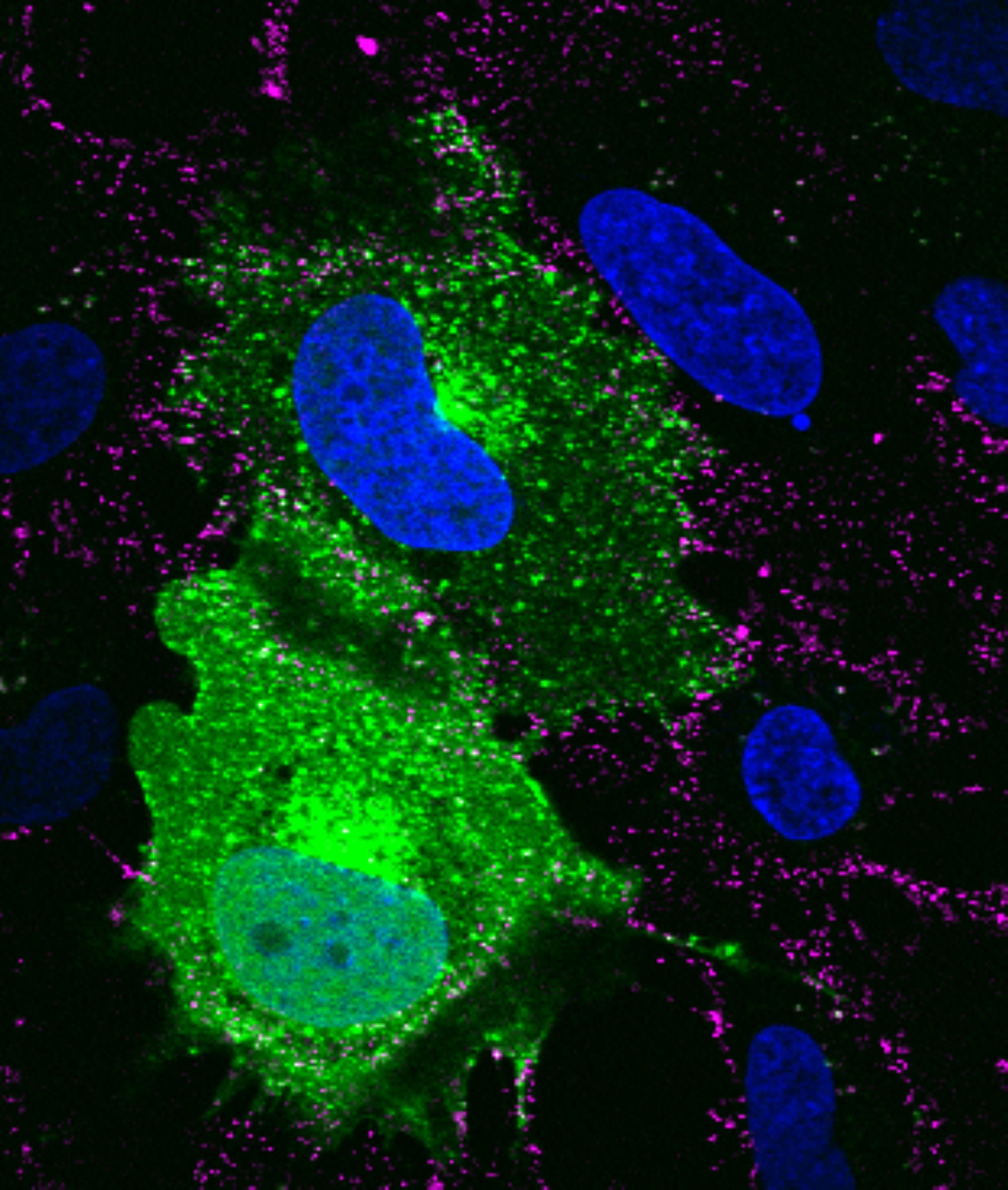 Rhinovirus C15 (RV-C15) infection of well-differentiated human bronchial epithelial cells cultured in air-liquid interface (hBEC-ALI) fixed at 12h post-infection (p.i.). A total of 50 μL of inoculum (PBS, left; or 1012 copies of RNA of RV-C15, right) was added onto the top of hBEC and incubated at 34°C. The inoculum was removed 4 h p.i., and the cells were fixed at 12h p.i. with 4% paraformaldehyde. The indirect immunofluorescence assay was done using antibody against acetylated alpha-tubulin to detect motile cilia (#ab24610, Abcam; green-colored) and against dsRNA to detect the replicative intermediary forms of RV-C15 (#10010200, Scicons; red-colored); while the nuclei were stained with Hoechst 33342 (#H3570, Molecular Probes; blue-colored).  The images were acquired using confocal microscopy (LSM710, Carl Zeiss Microscopy) at 630x magnification (scale bar = 10 μM). 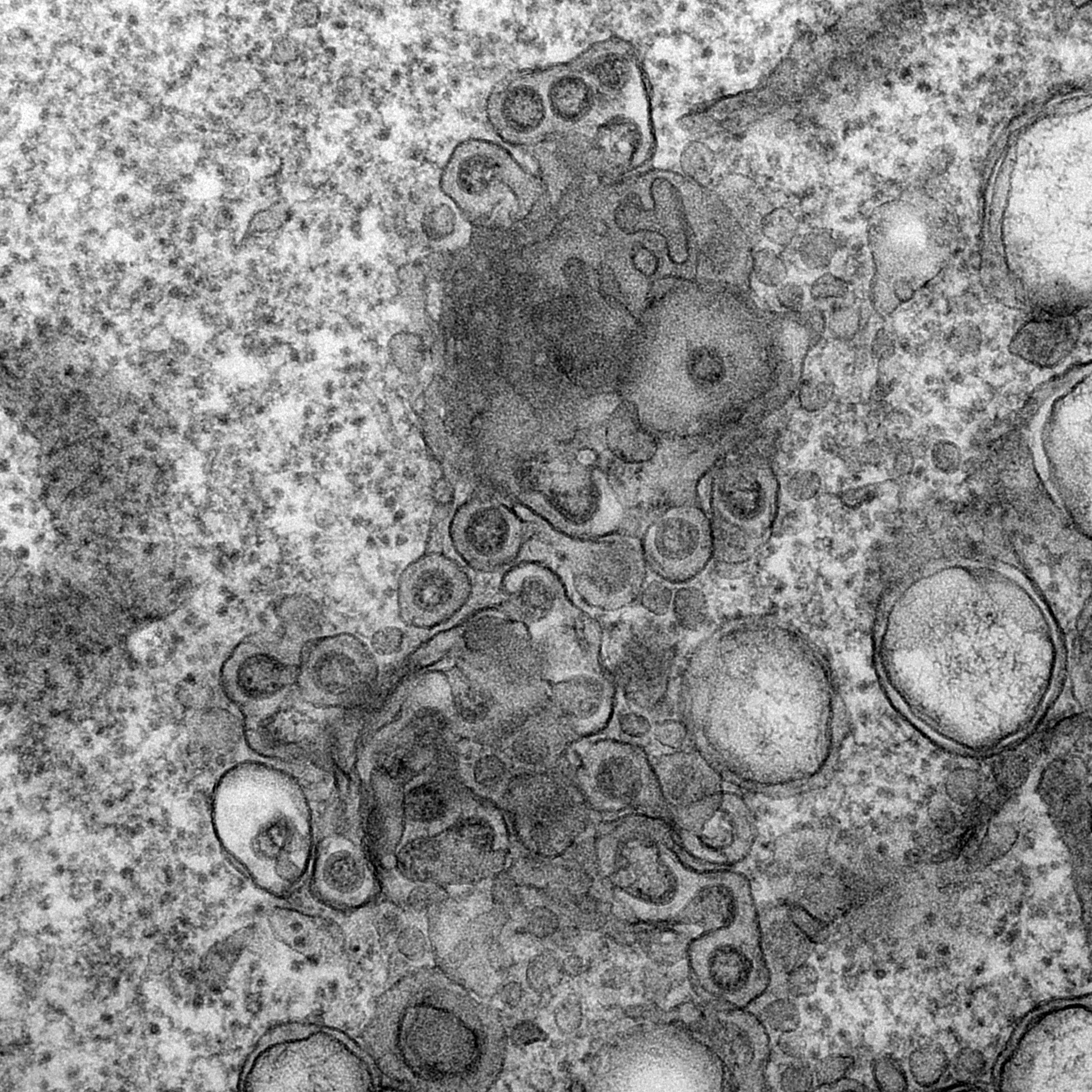 Did you miss any talks at ASV 2021? Recorded sessions are available for attendees to watch through Friday, July 30. Log in to the ASV 2021 Attendee Website now to catch up!

Thank you @AmerSocVirol for 40 years of dedication and support to #virology research. #ASV2021

Thank you @CameronLabUNC for your leadership of @AmerSocVirol as President! You leave big shoes to fill! It is such a privilege to work with you and I am excited for the coming year and work we will do! You are an inspiration! #LoveVirology #ASV2021 #ASV2022